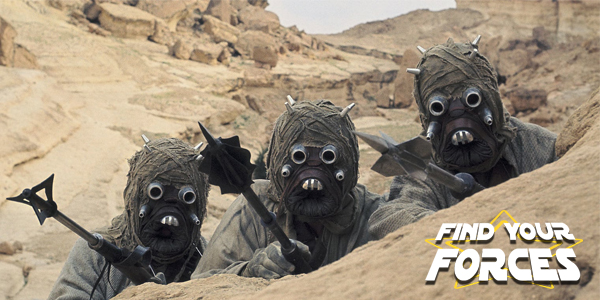 With their introduction in the first half of A New Hope, Tusken Raiders have fascinated Star Wars fans with their insular culture and mysterious ways. Many local inhabitants considered Tusken Raiders little more than savages.

This, however, was an oversimplification of an extremely nuanced people who cherished honor and tradition. Their history and traditions add fascinating layers to characters that started off as ragged villains.

The Tusken Raiders first appeared in the second draft of Star Wars: A New Hope. In this iteration, they were Imperial spies deployed as a platoon to scour the surface of Tatooine.

Their purpose was to search for the reason that brought Deak Starkiller (a character who initially was the younger brother of Annikin Starkiller) to the planet. Their appearance was humanoid, with red eyes.

It was in the third draft that Tusken Raiders became a native people of Tatooine and the familiar characters fans recognize today.

Children Of A Barren World

The Tusken Raiders, sometimes called Sand People or Tuskens, were a native species of Tatooine. Due to the planet’s harsh, desert environment, the Tusken Raiders became extremely territorial resulting in their xenophobia to outsiders.

They were known to attack the outskirts of smaller settlements like Anchorhead. This was due to their belief that any non-Tusken was not only an outsider but a trespasser on their planet.

One of their core beliefs involved water. The desert world of Tatooine had very limited water. The Tusken Raiders believed that all the water on the planet was therefore sacred and was promised to them.

Moisture farms set up by colonists were regularly attacked by the Tusken Raiders due to their belief. The rare water wells that did exist, like Gafsa, were considered so sacred to the Tuskens that merely trespassing close to one would lead to being attacked.

The Tuskens existed in clans that consisted of twenty to thirty individuals. Clans would be led by clan leaders, tribal chiefs, and warlords. The language used to communicate with one another was known as Tusken.

Tradition stated that a Tusken was eligible for adulthood at the age of 15. In order to become an adult, however, the Tusken had to slay a krayt dragon and cut out the valuable pearl found within its stomach.

Many Tuskens settled in a rocky area of the Jundland Wastes known locally as The Needles. The area was guarded from intruders by using a vicious species known as massiffs.

The Tusken Raiders shared a very close, almost religious bond with their banthas. During warrior initiation trials, a young Tusken would be given a bantha that matched their gender.

The pair would become extremely close as the young Tusken earned a place within their clan. When Tuskens married, their banthas also mated. If a bantha’s rider died, it was not long after that the bantha would also perish.

If the bantha died before its rider, the remains were placed in a large graveyard. The area was treated with great respect by Tuskens and even by other banthas.

Want to join the best Star Wars dating site and see who you match with? Register at Find Your Forces today!

Culture Of The Mysterious Tusken Raiders