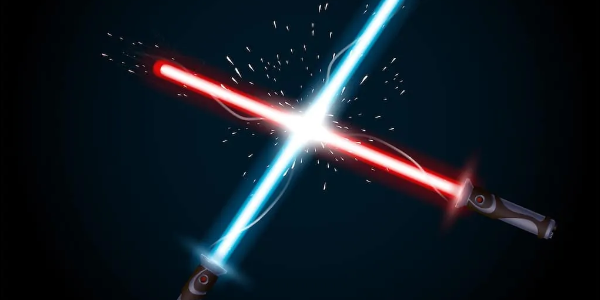 The lightsaber is an integral part of the Star Wars universe. They signify the mystique of the Jedi and the mysteries of the Force. Each film would add more to the lore of the lightsaber.

Behind the scenes, the lightsabers were a challenging feat to accomplish. Creative problem-solving would be needed. Without it, the lightsabers could have ended up looking like a cheap B-movie afterthought.

Over the years, the techniques evolved and allowed filmmakers to create grand duels that would have been impossible back in 1977. Continue reading below to learn how the lightsaber was conceived along with its special effects.

The weapons originally were inspired by the many serials that George Lucas watched and greatly enjoyed as a child.

Originally, when he began conceiving Star Wars he wanted to include swords. He created the concept of the lightsaber to better compliment the futuristic setting of Star Wars.

It was later that Lucas limited the use of the lightsabers exclusively to the Jedi. This was done in order to add a level of mystique to both the weapon and the Jedi Knights. In the early drafts, the lightsabers were referred to as “lazerswords”.

The original concept of the lightsaber crystals was limited to only a decoration. It was first mentioned in the novelization of A New Hope. There were no other mentions aside from this single instance in the original films or novelizations.

Designing The Props And Their Effects

The prop design and effects of the lightsaber proved to be a challenge during A New Hope. The lightsaber Luke used was made from a Graflex camera side-attach flash.

Vader’s lightsaber was made out of a Micro Precision Products flash attachment. The handle-grips on these lightsabers were made out of rubber windshield wipers with D-rings attached to the bottom so they could be worn on belts.

The most complex hilt designed for the film was Obi-Wan’s. It was made from an Armitage Shanks Starlite model Handwheel, Browning ANM2 machine gun booster, WWI No.3 Mk.1 British Rifle Grenade, and a Rolls-Royce Derwent Mk.8/Mk.9 Jet Engine Balance Pipe.

The original trilogy’s lightsaber effects were created using a complicated method. During the filming of A New Hope, a three-sided rod covered with reflective material served as the blade.

The rod would then be spun rapidly by a compact motor inside the hilt. The spinning would reflect the light on set and create a glowing effect in-camera. These early props, however, were very difficult to handle.

The lightsaber props used in A New Hope were very fragile. They would easily break during fight scenes. The glowing effect also did not always function as intended.

The glow would disappear and expose the spinning rod whenever the blade moved out of the light or pointed at the camera. This could be somewhat addressed by rotoscoping the blade and animating the glow.

The animated glow was achieved by adding tracing onto a blown-up copy of the frame with a pen and some colored ink. The process was painstaking and done one frame at a time.

The animation phase was also when the blades were given their respective colors. The unedited props were simple white-looking blades.

Want to join the best Star Wars dating site and see who you match with? Register at Find Your Forces today!